My daughter's Junior troop recently completed their Journey to earn their Get Moving badge.  They spent the last year diligently working on it, learning about energy and conservation along the way.  The Journey concluded with an event at a local park to celebrate their accomplishment.  Because I love parties, I volunteered to assist the mom leading the event.  She was gracious enough to let me be her collaborator on the project.  It was so much fun to share this project with her - thanks, T.!  We are kindred party-planning spirits! 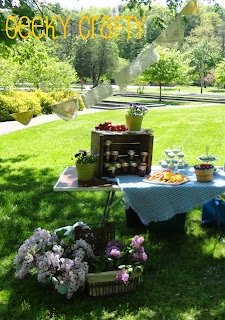 To honor the journey, we stuck with an earth and conservation theme and worked to bring in lots of color as well as upcycled and reclaimed elements with some pretty vintage touches as the cherry on top and is that a run-on sentence or what?

Food
Dirt cups:  Chocolate pudding and crumbs with whipped cream, enclosed in mason jars - the ultimate eco-friendly party tool.  T. gussied them up with cupcake wrappers on the lids for a punch of color.  She stacked them in a beautiful dark wood crate, which I totally covet! 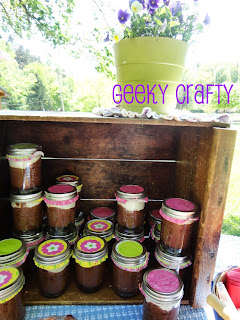 Earth cupcakes:  Modified from this post (skipped the heart center), these were a hit.  Topped with a simple buttercream, they were quick, easy, and festive.  Side note - when I tinted the batter, I wasn't thinking and did more green than blue and it irritated me all day that my ratio of "land" to "water" was skewed.  Did I mention that I'm a geek?  Anyhoo, regarding the frosting - I did hear from some girls that the frosting was a bit too sweet.  Does anyone have a buttercream recipe that's less sweet?  Mine is 2 sticks butter, 4 cups powdered sugar (which I reduced to 3 cups), and a splash of milk and a bit of vanilla.  My favorite frosting is the cooked frosting recipe listed here - it is TO DIE FOR, but I was worried it wouldn't hold up in the heat - even the buttercream got a little flat and melty and buttercream is MUCH stiffer than this cooked frosting.  (And in case I wasn't clear - this frosting = AMAZING.)  But if you make it, do yourself a favor and do not use store-brand butter.  Name-brand butter only.  You may also want to do a practice run before trying to make it for an event.  There are some traps that can make things go very wrong. 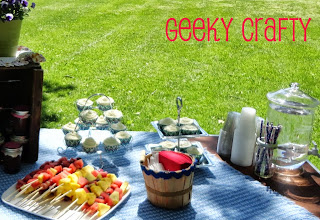 Fruit Skewers:  T. and I split them up and each made half.  I really liked that approach because we ended up picking different fruits, which made for a nice variety in terms of taste and color. 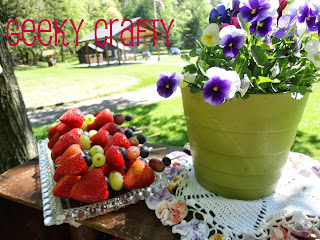 Decor
The food table was covered in a blue cloth (originally, it was covered by T.'s creamy vintage lace tablecloth, but the high winds knocked over a pitcher of lilacs that some idiot put on the table (moi!), so we had to improvise.  Food was arranged around the aforementioned crate (me want!) and accented with some pretty pansies and a sweet little doily.  In lieu of water bottles, T. brought a beverage dispenser filled with cool water.  We supplied plastic cups which were cobbled together remnants from other parties.  We also made sure to bring recycling bins to the park.  The paper straws added a nice pop of color.  The final touch was a simple banner that T. put together with twine and vintage napkins - the napkins were draped over the twine and pinned in place.  Even in teh high winds, it held together nicely.  The vintage napkin banner was just the right little touch to bring some vintage elegance to the setting. 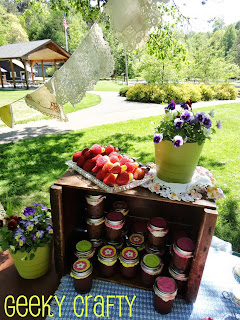 The girls sat picnic-style on blankets spread under trees to enjoy their treats.  The idea was to have jugs and jars of lilacs scattered around, but it was just too windy.  The lilacs were grouped in a pretty basket and used to accent the food table instead. 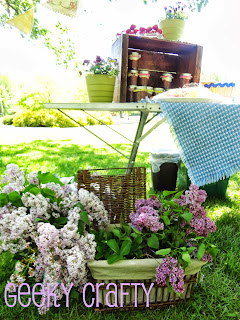 Activity
In keeping with their focus on recycling, the girls made jewelry from reclaimed hardware.  We have a Tool Thrift Shop in town where donated items are resold at low prices.  All proceeds go to a local senior living facility.  I was able to find a ton of washers in various sizes.  A quick coat of primer and they were ready to be enameled with nail polish.  I found several sets of mini bottles at Big Lots and Marshall's and the girls went to town making unique pieces.  We provided hemp twine in bright colors to string the finished product.

Awards
The event concluded with the leaders talking with the girls about the highlights of the Journey followed by passing out their patches.  For a fun presentation, the patches and a seed packet with a vintage-inspired label were bundled into a colorful bandanna hobo pouch tied with jute twine.  Because the whole troop earned the same patch, there was no need to personalize the bandanna pouches.  In retrospect, we should have considered handing them out rather than letting the girls pick their own.  I noticed that while the leader was speaking, some of the girls were more focused on creeping closer to the bandannas to ensure that they could be the 1st to pick their color.  Oops! 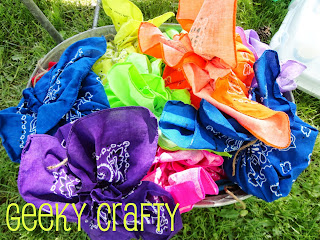