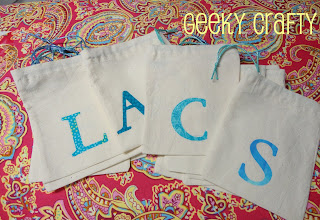 So my daughter's joint-rock-climbing-birthday-party is fast approaching and we're putting the finishing touches on everything.  This has been a lot of fun to plan and also, an unexpectedly good learning / personal growth opportunity for me.  Working with another mom who does not share my over-the-top tendencies has made me realize some things about myself.  Here's the story...

For favors, I was planning:
When I showed the other mom the list, she was agog and said that it seemed like a lot and that the kids would probably be happy with just Pop Rocks and a Carabineer.  This was the thought that popped into my head:  "Who cares?  It goes with the theme!"

This is probably not a healthy line of thinking.  I realized that I have gotten to the point where I am focused more on the theming than the desires of the guests.  Not to say that my favors wouldn't have been well-received - I'm sure that they would have been.  But I'm now trying to make a real effort to scale back on the volume.  Meaning, just because I have several good ideas doesn't mean that they all have to be used.  To that end, favors for this party will be:
I think that the kids will love them, they still fit the theme, and they won't break the bank.  To put my own spin on it and to utilize my new found technique of cutting fabric on my Cricut (yes, you can cut fabric on the Cricut - huzzah!), I made personalized muslin pouches for each guest.  It was cheap and easy and didn't even take that long.

Cut your muslin into strips large enough to double over and have seam allowance on the sides and a wider allowance at the top to hold the drawstring.* 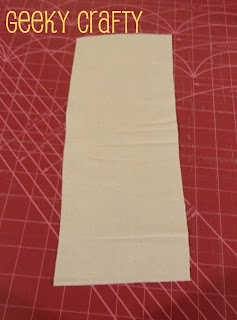 Fold in half.  Zip a quick seam up each side. 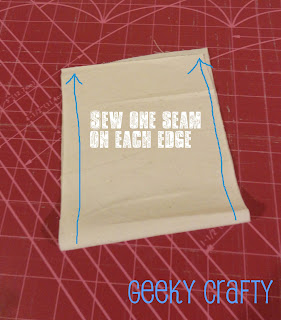 Iron your seams flat and fold down the top far enough that you will be able to thread your cording through. 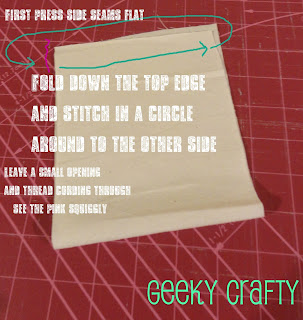 Stitch around the folded top almost all the way around - leave a small opening for the cording.  Thread the cording through and knot the ends.

Iron heat bond** to the back of your fabrics to be cut for initials.

Peel off the white paper backing*** and then apply to the Cricut sticky mat.  I put my needle to 5, pressure to highest, speed to lowest.  I used the Classic Font cartridge and did 2" letters. 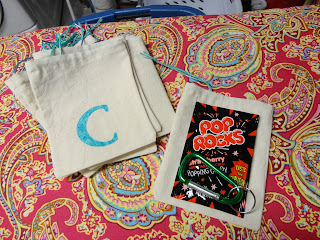 Once cut, apply letters to muslin pouches and iron on. 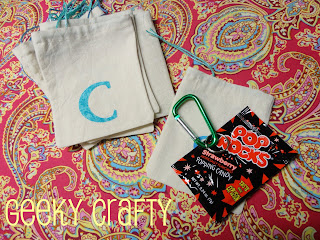 *When you decide on the width, think about whether it will be big enough to fit on your sewing machine.  Mine were too small and I had to do the seam around the top by hand.  Not terrible, but not ideal either.

**Be careful with this - it's easy to get confused and iron the heat bond to your ironing board cover or worse - to your iron.  Don't try this if you are tired or distracted.

***Don't forget this step - you will have a huge mess on your mat if you don't remove the paper.  Also, your letters won't cut well.
Posted by Geeky Crafty at 7:03 AM